The Contemporary Music Centre and Chamber Choir Ireland are delighted to announce that composers David Coonan, Barry O’Halpin and Norah Walsh have been selected to participate in the Choral Sketches project for 2017/2018.

Through Chamber Choir Ireland’s membership of TENSO, the network of professional chamber choirs in Europe, international composer Jug Markovic will also participate in the Choral Sketches programme, nominated and supported by TENSO.

With Choral Sketches, Chamber Choir Ireland and the Contemporary Music Centre have partnered to present a unique professional development opportunity for composers who wish to develop their skills in writing choral music with mentoring from renowned composer Tarik O’Regan.  The purpose of the Choral Sketches initiative is to provide a creative and open environment for composers to deepen their experience in writing for voices in a choral context.

Each of the selected composers will receive online mentoring from Tarik O’Regan from December 2017 – January 2018 leading to the development of a series of compositional sketches for a new choral work.  These sketches by David, Barry, Norah and Jug will be the focus of a public workshop led by Tarik O’Regan with Chamber Choir Ireland and guest conductor Nils Schweckendiek on Saturday the 20th of  January 2018, in Dublin.

In a highly competitive process, Tarik O’Regan has also given a special recommendation to composer Anna Murray for mentoring in the project.

Full details of the public workshop from Contemporary Music Centre and Chamber Choir Ireland from December 2017. 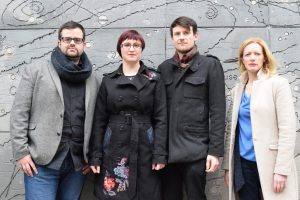 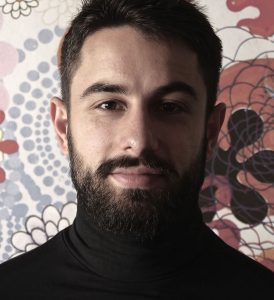 Barry O’ Halpin (1987) is a Dublin-based composer and guitarist. Taking strong inspiration from fields such as bioacoustics, microscopy and film, his music pursues a crawling and immersive organic quality, balance microtonal sonorities and liminal timbres with a strongly intuitive approach to harmony and gesture, influenced by broad experience of experimental rock, electronica and jazz alongside the contemporary classical. He frequently explores new uses of the electric guitar alongside classical instrumentation, employing invented tunings and unorthodox techniques.

Sleep Flare for 8 musicians, written to score a silent film by Rouzbeh Rashidi, was commissioned by Kirkos and premiered at Dublin’s Filmbase in September 2017 as part of their Wilderness Notes collaboration with Experime]ntal Film Society. In 2015, the trio Lipids was toured by Crash Ensemble in their Born in the 80s showcase of young Irish composers, and featured in their 2016 Composing the Island Music Marathon.  In 2015, Toric for string orchestra was commissioned and performed by Fishamble Sinfonia & guest director Darragh Morgan. His flute duo Twin Molluscs was a finalist in Rarescale’s 2013 student composition competition and was performed by BINARY at Tokyo Wonder Site festival 2016.

As an electric guitarist, Barry regularly plays with Crash Ensemble and has worked closely with Kirkos Ensemble and London composer/performer collective Bastard Assignments. He was Guitar Fellow for US ensemble Bang On A Can’s Summer Music Festival 2017 at Massachusetts Museum of Contemporary Art, and the same group’s Winter 2016 Villa Musica residency in Germany.

He composes and performs with experimental rock band Alarmist. Since 2011 they have released 2 EPs and the LP Popular Demain, with all three reaching Bandcamp’s top 30 experimental and math rock charts. Tours have in included UK, Europe and Canada, with media coverage including BBC Radio, Jon Schaeffer’s New Sounds WNYC, RTE, All About Jazz, Guardian, Sunday Times.

He is currently a PhD candidate at Queen’s University Belfast with Simon Mawhinney. In 2013 he obtained an MMus (Distinction) in Composition at Trinity Laban Conservatoire, London under Gwyn Pritchard & Paul Newland. In 2010 he was awarded the Geoffrey Singleton prize for his composition portfolio upon graduation from Music in Trinity College Dublin, where he studied with composers Donnacha Dennehy and Sean Reed.

Norah Walsh is a composer, musical director and musician based in Dublin, Ireland.

She holds a first class honours Bachelor of Music specialising in composition at the DIT Conservatory of Music and Drama. Here she studied composition under Jane O’Leary and Dave Flynn and piano under Paula Hughes. Norah has participated in the Irish Summer School of Composition and has received master classes from renowned national and international composers Clarence Barlow, Hans Abrahamsen, Nichola LeFanu, Kevin O’Connell, Martin O’Leary and John McLachlan,

Writing for voice is a significant element Norah’s work and her choral compositions have been performed by Laetare,  Mellow Tonics, Rathdown Cantori, the DIT Chamber Choir conducted by David Brophy, Ossia Youth Choir and local school and church choirs. Her most recent commission in 2017 was for the CMC’s collaborative short opera Beneath Iseult’s Tower performed in September. She works as a musical director for a number of Dublin based choirs and as a facilitator in many community and education projects. She recently worked as choral conductor and arranger for Tyrone Productions and RTE’s soon to air Choir of Ages.

Norah’s compositions are predominantly acoustic drawing from a broad range of influences including classical, popular, Irish traditional and jazz. She is represented by the Contemporary Music Centre in Dublin.

David Coonan (1987) is an Irish composer. His works have been performed by, amongst others, the London Symphony Orchestra, BBC Symphony Orchestra, the RTÉ National Symphony Orchestra of Ireland, the RAM Manson Ensemble, EXAUDI vocal ensemble, the Choir of the Chapels Royal HM Tower of London, and Belfast city organist Colm Carey, and with conductors including Gavin Maloney, Maxime Tortelier, François-Xavier Roth, Pierre-André Valade and Elgar Howarth.

He was a featured composer in the RTÉ National Symphony Orchestra’s ‘Horizons’ Series in January 2015; this saw the premiere of his Sarcasms for orchestra, an RTÉ commission, and his violin concerto Träumerei, with soloist Kristine Balanas, in a portrait concert at the National Concert Hall in Dublin, and was subsequently broadcast on RTÉ Lyric FM. He is a member of the Association of Irish Composers, the Irish Composers Collective, and the London Symphony Orchestra Soundhub community. He is currently composer-in-residence to Vivre Musicale and was a BBC Symphony Orchestra / Sound and Music ‘Embedded’ composer-in-residence for 2015-16. He has held artist residencies at the Contemporary Music Centre Dublin (2016) and at the Tyrone Guthrie Centre (2015) thanks to a Kildare County Council Artist Bursary. He was a recipient of a 16×16: Next Generation Bursary Award by the Irish Arts Council, as part of their celebrations of the 1916 Easter Rising Centenary, and the 2016 Jerome Hynes Composer Award from the National Concert Hall, Dublin. In late 2016, he wrote music for acclaimed-Irish-playwright Marina Carr’s stage adaptation of Tolstoy’s ‘Anna Karenina’, staged at the Abbey Theatre, Dublin, and directed by Wayne Jordan.

He studied at Trinity College Dublin with Donnacha Dennehy, and pursued further composition studies with Christopher Austin at the Royal Academy of Music in London, with funds provided by the Irish Arts Council and the Arts & Humanities Research Council UK. He graduated with Distinction and the DipRAM award for ‘outstanding final portfolio’ in 2011.

Jug K. Marković (1987) is a Serbian, Belgrade based composer. He believes in non-cerebral, impulsive, passion-driven composing.

Jug was born in Belgrade where he graduated at the Faculty of Philosophy and afterwards at the Faculty of Music Art in Belgrade. Apart from his principal teachers Vlastimir Trajković and Zoran Erić, he had attended numerous masterclasses with renowned composers such as Enno Poppe, Georges Aperghis, Mark Andre, John Corigliano, Fabien Levy, Michael Finissy, Raphael Cendo, Jorge Sanchez-Chiong. His music has been performed at important music festivals in Europe such as “Donaueschinger Musiktage” and “Festival d’Aix-en-Provence”. Marković is the winner of the TENSO young composers award 2017 and winner of the 3rd Anton Matasovsky Composers Competition in Vienna, for his piece Egon (Austria, 2017). He was also awarded the 1stprize at the Hong Kong International Percussion Convention Competition (China, 2016) for piece Hydra, the Special Prize at Busan Maru International Competition (South Korea, 2016) and Josip Slavenski prize (Serbia, 2015) for piece Magistralen. He attended Impuls Academy for Contemporary Music in Graz (2017), where he collaborated with ensemble Klangforum Wien on his piece mother tongue that was conducted by Enno Poppe. Jug was also a participant of the 47th Darmstadt Summer Course, ManiFeste academy (Ircam 2017), TENSO young composers workshop 2017 (The Professional Network of European Chamber Choirs), Britten Pears Young Artists Program (2017) and Music Academy Donaueschingen (2014). He was commissioned by the “Festival d’Aix-en-Provence” where his piece Ultraterreno (for two female voices and piano) was premiered in June 2016.  In October 2014 he took part in the festival of contemporary music “Donaueschinger Musiktage” in Germany where his piece Magistralen (for septet) was performed within the “Next Generation” program. During 2014, his composition Angelus Novus (for 16 strings) was performed in Belgrade by the renowned Serbian ensemble “St. George Strings”. Other collaborations include ensembles like “Construction Site New Music Ensemble” who together with “St. George Strings” performed Marković’s Kammerkonzert (for 18 instruments) at the Belgrade Philharmonic Hall in May 2014.  He is also a frequent participant in residency programs and workshops organized by ENOA (European Network of Opera Academies).

Jug was granted a residency at Snape Maltings (UK) during which he will be tutored by British composer Michael Finnissy where he will work on a piece for soprano and chamber ensemble during December 2017.