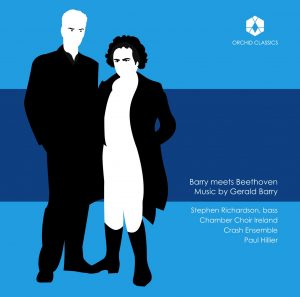 Since it’s release in June, we’re delighted with some of the kind words that our latest recording Barry meets Beethoven has received from the press.

An album of works by contemporary Irish composer Gerald Barry, it features the premiere recordings of two major works that dramatise key episodes in the life of Ludwig van Beethoven.

Produced in collaboration with the Crash Ensemble and under the direction of Paul Hillier,  the recording and production of this CD was made possible through the Arts Council’s Annual Funding support for Chamber Choir Ireland for which we are deeply grateful.

Here are some of the critics comments –

“Showing Beethoven in all aspects, cantankerous as well as sympathetic, the two works present a different kind of heroism, that of the everyday.” Gramophone Magazine 5*

“Under Paul Hillier, Chamber Choir Ireland tackle each of the scores as if Barry’s out-there settings and markings were the most natural thing in the world, and make them sound as if they were exactly that. Tough, committed singing, done with vivid grace.”  Choir and Organ Magazine, 4*

Barry meets Beethoven is available through our website, Spotify and Tower Records.