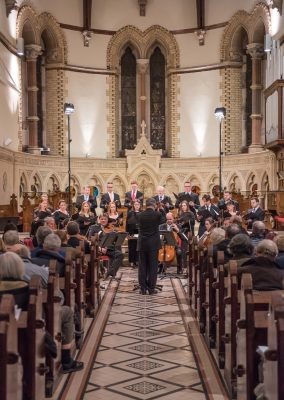 Brian is currently Deputy Head of Acquisitions and an Executive Producer with RTÉ Television. He produces a wide variety of programming and his most recent and best-known series was Great Lighthouses of Ireland. Brian has a long history of involvement in the arts, he was a founder member of the Cork Theatre Company and acted with The Everyman Players in Cork and later trained with Dublin’s Focus Theatre. Brian is a former non-executive director of Monsoon Accessorize Ireland Ltd, a retail enterprise with 13 outlets in the ROI. He oversaw a successful examiner-ship process which ensured the survival and rationalisation of the group in 2011.

He was, prior to his career change, the commercial and institutional property manager with Hamilton Osborne King, Mason Owen and Lyons, and Druker Fanning and partners, managing a broad commercial portfolio.

Brian has a broad range of interests, theatre, opera, ballet, modern dance and cinema, and music, both choral and classical. His professional career requires a wide engagement with the arts in all forms.

Olga is currently the Director of Kilkenny Arts Festival. She has held a number of key posts in the arts sector, including Assistant Manager of the O’Reilly Theatre in Dublin, CEO of Crash Ensemble, General Manager of the Festival of World Cultures, and Orchestra Manager of the RTÉ Concert Orchestra. She was also previously the Festival Producer at Kilkenny Arts Festival as well as New Music Dublin. Olga served as overall Project Manager under the Department of the Taoiseach and RTÉ, for Ireland 2016/RTÉ Reflecting the Rising celebrations at Easter 2016. She currently also serves on the Board of Corcadorca Theatre Company.

A qualified solicitor and experienced governance professional, Susan is responsible for the day-to-day management of the corporate secretarial function of Grafton Group plc, a FTSE-250 listed building materials group. Her role involves ensuring that Grafton, its Board of Directors and subsidiaries in various geographic locations remain compliant with all relevant legal and regulatory requirements, stock exchange listing rules, and corporate governance codes.

Susan qualified as a solicitor in 2009 following which she practiced in a Dublin general practice firm, advising on a wide range of areas including commercial, corporate, employment, property and technology/IP law. She then moved into the specialist field of corporate governance, gaining experience in the regulated financial services and the commercial sector.

Prior to her legal career, Susan undertook an MPhil in Music and Media Technologies (MMT) in TCD, and she plays piano and maintains a keen interest in classical music and contemporary composition.

Alastair began singing as a choir boy in the local church choir. At Trinity College Dublin, he joined the Choral Society then under the direction of Dr Jo Groocock. Returning to Belfast he joined Belfast Philharmonic Society singing in the bass and tenor sections for over 30 years during which time he practiced as a solicitor. Alastair was elected President of the Law Society of Northern Ireland in 1996 and represented the Society for 13 years on the CCBE—the Council of the Bars and Law Societies of Europe. In 1998 he was appointed as a legal member and chairman of the Pensions Appeal Tribunal for Northern Ireland and became Deputy President in 2017. In 2009 he was appointed as a fee paid judge of the First-tier Tribunal (Tax Chamber) where he hears tax appeals throughout the United Kingdom. Alastair is currently Chairman of Belfast Philharmonic Society and Hearth Historic Buildings Trust, Honorary Secretary of Ulster Architectural Heritage Society and a member of the board of Clanmil Housing Association.

Richard is a member of Chartered Accountants Ireland. With over 15 years’ working in private practice, he has a wide range of experience providing tax advice, accounting and auditing services to many businesses in the SME sector.

During his time in both small and large accountancy firms, Richard has worked with a variety of non-profit and charitable organisations and has a knowledge of the financial and legal requirements of such companies, including providing advice on issues of governance and statutory matters.

Richard is a partner in a firm of Chartered Accountants and Registered Auditors, Richard Ensor & Co., a practice which has operated for more than 30 years in Dublin.

Triona is a Human Resources Executive with over 20 years’ experience operating at a Senior Management level within both US multinational and indigenous Irish companies, supporting diverse business functions, including manufacturing, shared services and retail, mainly in the Pharmaceutical sector and more recently in the banking and legal sectors. Triona is currently Chief People Officer at Arthur Cox where she is responsible for HR Leadership and Strategy to enable continued business growth through high performing leadership and culture. Triona is an IMI Council Member.

Triona’s key areas of expertise include purpose driven cultural transformation, business partnership with executives on organisation and talent strategies, effective organisation change management and strategic planning. Triona has more recently been involved in broader sustainability strategy as it relates to engagement and alignment with people strategy.
Triona is passionate about coaching and mentoring having supported talent at all levels in that regard over the course of her career, across different industries, leveraging her own professional experience and expertise to pragmatically steer others to enhance their development.

Ian Smith
Ian studied horn and piano at the Royal Academy of Music in London. He was appointed as Co-Principal Horn with the RSNO/Royal Scottish National Orchestra in 1971 and also worked with the London Symphony Orchestra. Ian was a founding member and director of Scottish Brass. In 1993 Ian joined the UK Musicians’ Union as Scottish & Northern Ireland Organiser and founded the UK Folk & Roots department. Ian was a member of the Board of Governors at the RSAMD (now RCS/Royal Conservatoire of Scotland) and an Executive Board member of the Musicians’ Benevolent Fund (now Help Musicians UK).

Ian was appointed as Head of Music at the Scottish Arts Council/Creative Scotland in 2005, where he was privileged to co-found the Youth Music Initiative, which has now seen more than £175M in additional government investment targeted at instrumental and singing teaching. Ian earned an international reputation for successfully promoting Scottish music and musicians. In 2013, Ian was elected to the executive board of the European Music Council, based in Bonn, Germany and in 2015 was elected President/Chair. Ian also served on the executive board of the International Music Council, based at Unesco in Paris. In January 2016 Ian was elected to the board of the International Society for the Performing Arts based in New York and in January 2017 was appointed Treasurer and a member of the ISPA Executive Board. In 2017, Ian joined the board of multi-media arts organisation; Cryptic, based in Glasgow who also programme and direct Sonica. In 2018, Ian joined the board of the Red Note Ensemble (Edinburgh), thus serving two of Scotland’s most significant arts organisations.

In September 2020. Ian and his wife relocated to Ireland to be closer to their daughter and family in Co Laois.. Ian retains his membership of both Cryptic and Red Note boards and was recently elected as Vice-Chair of the Red Note Ensemble. In January 2022, Ian was delighted to be invited to join the board of Chamber Choir Ireland and is looking forward to working with such a prestigious ensemble.