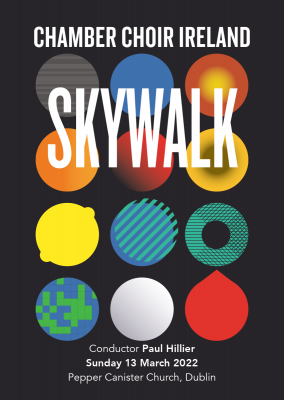 Chamber Choir Ireland
Paul Hillier—Artistic Director
Alex Petcu—Percussion
In the first concert of a two-part Steve Martland retrospective, Chamber Choir Ireland will perform a number of the late composer's choral works, including his famous reimagining of children’s playground songs entitled Street Songs, as well as the concert’s dreamlike title work Skywalk, in which an astronaut looks back upon the beauty of Earth from space—made all the more poignant by the composer’s departure from our world in 2013.

Martland's works will be juxtaposed with those of Renaissance composer Clément Janequin who, centuries before, shared the same desire to reflect the sounds of the world around him.


Note: Out of sensitivity, we have removed Clément Janequin’s chanson ‘La Bataille’ from the programme. Instead, we have added a piece by Ukrainian composer Galina Grigorjeva, Psalm 103 (from Vespers), and Arvo Pärt’s Da Pacem (Give Peace), in heartfelt solidarity with the Ukrainian people. Please find the updated concert programme below.


Doors open at 1:45PM, concert to begin at 2:30PM. Please arrive at least 30 minutes before the beginning of the concert to allow the Chamber Choir Ireland team to seat audience members safely.

Chamber Choir is funded by the Arts Council / An Chomhairle Ealaion and Dublin City Council, is a resident ensemble at the National Concert Hall, and associate artists at Dublin City University.