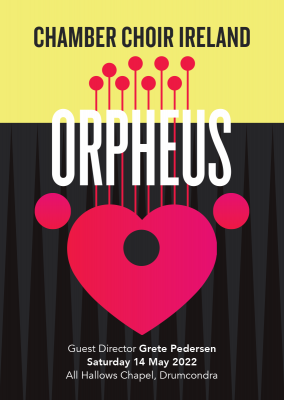 Artistic Director of the Norwegian Soloists’ Choir, Grete Pedersen, joins Chamber Choir Ireland as Guest Director for this concert of works around the story of Orpheus—musician, poet, and prophet of Greek mythology, who mourns the loss of his beloved Eurydice and, with his beautiful song, moves the god of death to tears to be reunited with her.

The concert explores musical perspectives on the Orpheus myth through time:

Tracing its musical responses through the centuries, we see how this story about the tremendous power of music—seemingly an endless font of inspiration—is perhaps as transcendent as Orpheus himself.

Chamber Choir is funded by the Arts Council / An Chomhairle Ealaion and Dublin City Council, is a resident ensemble at the National Concert Hall, and associate artists at Dublin City University.