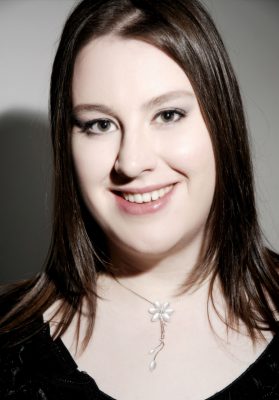 Felicity studied on the Opera course at the Royal Welsh College of Music and Drama and at Trinity Laban Conservatoire of Music and Dance, graduating with First Class Honours and winning the Silver Medal. She joined Chamber Choir Ireland in 2020. Felicity also appears with groups including the BBC Singers, Chamber Choir of London and upper-voice vocal consort Philomel. In September 2018 she took part in Memorial at the Barbican Theatre with Tippett Voices. She has performed with the English National Opera Chorus, South Downs Opera, Dartington Opera and many more, playing roles including Micaela (Carmen), Clorinda (La Cenerentola), High Priestess (Aida) and Rosalinde (Die Fledermaus). In 2018 she also made her debut at the Cadogan Hall as soprano soloist in the Bach Magnificat. Other oratorio engagements include Haydn The Creation and Nelson Mass, Verdi Requiem, Mozart Coronation Mass and Faure Requiem.

A passionate exponent of contemporary music, Felicity placed 2nd in the 2016 John Kerr Award for English Song, with pianist Catherine Herriott, also winning the Audience Prize. She and Catherine have worked with the London Composers Forum and similar groups, collaborating on numerous events and premieres. She is involved in running the London Festival of Contemporary Church Music, sings with the 11-strong professional choir of All Saints Margaret Street church in Central London, and has a thriving teaching practice both privately and in schools.