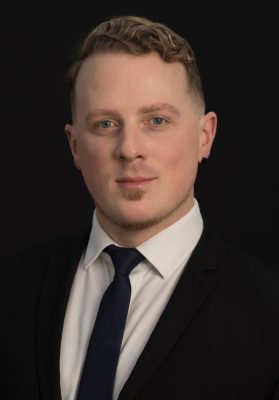 Shane Barriscale is a Dublin-based tenor specialising in choral and ensemble singing. He graduated with honours from a Masters in Music Performance (Voice) through DIT Conservatory of Music and Drama in 2013, and a Masters in Interactive Media in 2011, having previously undertaken an undergraduate Architecture Degree. Shane is now working full-time in vocal performance and music education.

Originally from Limerick, Shane began his musical training at the Limerick School of Music, studying Piano, Violin and Voice. From an early age, choral music has played a prominent role in his life. This was encouraged and developed by Limerick teacher and conductor Maire Keary-Scanlon, who directed Shane in three choirs between 1997 and 2012 (Cantette Children’s Choir, County Limerick Youth Choir and the Irish Chamber Orchestra Chorus). This cultivated a love of vocal harmony which continues to this day. From 2006 to 2013, Shane performed with the Bunratty Castle Singers, a medieval-themed vocal ensemble based in Bunratty, Co. Clare. In 2012, Shane was selected to take part in a Choral Mentorship Scheme with Chamber Choir Ireland via a collaboration with the Irish Youth Chamber Choir, which inspired a decision to move to Dublin to pursue music full-time. He now continues to hone his craft in Dublin under the tuition of Soprano Judith Mok.

Shane is closely associated with St. Mary’s Pro-Cathedral. From 2015 to 2019, he was the Assistant Director of The Palestrina Choir, alongside the choir’s Musical Director Blanaid Murphy. He has also been performing with the tenor section of the choir since 2013. He has worked closely with St. Mary’s Pro-Cathedral Girls’ Choir as a vocal coach, as well as Continuum Youth Choir as a choral mentor for the Tenors and Basses. In 2017, Shane became the Musical Director of the Rosemount Singers based in Julianstown, Co. Meath. In 2019, he became the Musical Director of the Get Singing Choir based in Greystones, Co. Wicklow and the Choral Facilitator of Glasnevin National School, Dublin.

Shane has established himself as a prominent feature on the choral music scene in Ireland. He has performed, toured and recorded with many Irish groups including the Irish Youth Chamber Choir, New Dublin Voices, Sestina Early Music Ensemble, Tonnta Vocal Ensemble, Charles Wood Singers, Celtic Woman, Northern Ireland Opera, Wide Open Opera, Opera Theatre Company, RTÉ Concert Orchestra Chorus, Crux Vocal Ensemble, Peregryne, ‘Lassus’ Chamber Choir and Chamber Choir Ireland. Since 2013, Shane has also been performing with Ireland’s leading Vocal Harmony quartet 4 in a Bar, winners of the Irish Association of Barbershop Singer’s National Male Voice Quartet category in 2011, 2013 and 2015 and International Male Voice Quartet category in 2016. As both a performer and an educator, inspiring a love of choral singing in people of all ages has become a great ambition of Shane’s, something which he hopes to continue doing well into the future.