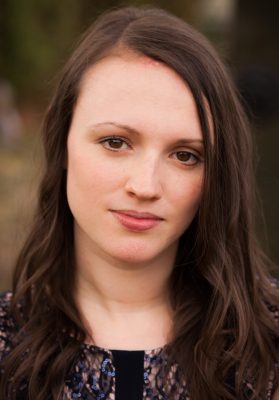 Elizabeth received her Postgraduate Diploma in Vocal Performance from Royal Birmingham Conservatoire in 2015. She now studies with Anne Dawson and has established herself as a highly experienced ensemble singer and soloist. She sings regularly with Ex Cathedra, Armonico Consort and Chamber Choir Ireland and she has also performed, recorded and toured with many other leading choirs and consorts in the UK, including Tenebrae, BBC Singers, ORA Singers, London Voices, RSVP Voices and The Cardinall’s Musick. She sings regularly at the Birmingham Oratory and also deputises at many churches in London, including Temple Church, St Paul’s Knightsbridge, and Christ Church in Hampstead. After her studies she became one of the inaugural VOCES8 Scholars which led to her deputising for VOCES8 on tour at the Utrecht Early Music Festival. She also appears on their disc ‘Winter’ with Decca Classics and has appeared as a step-out soloist with them in a performance of Handel’s Dixit Dominus.

Recent operatic roles include Second Woman in Dido and Aeneas with VOCES8/L’Arpeggiata and Second Woman/Second Witch with Ex Cathedra. Elizabeth sang the title role of Dido at the English Music Festival and the Swaledale Festival in recent years with Armonico Consort. On the concert stage, she has worked with notable conductors, such as Nigel Short, Jeffrey Skidmore, Harry Christophers, and Paul McCreesh.

Recent oratorio engagements include Handel Messiah, Rossini Petite Messe Solennelle and Mozart Exsultate Jubilate. Elizabeth has performed as a soloist in many impressive venues, such as Symphony Hall, De Montfort Hall, St George’s in Bristol and St John’s, Smith Square in London. She features as a step-out soloist regularly with Ex Cathedra, and in recent years appeared as a soloist in this capacity alongside Carolyn Sampson and the CBSO in a concert exploring Mozart’s Women. Last year Elizabeth also sang as a soloist at the Brighton Early Music Festival.